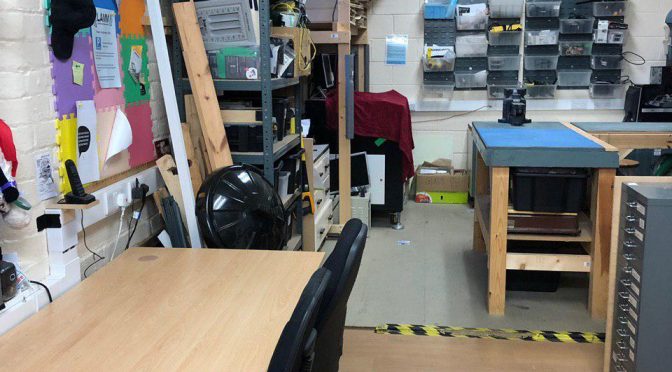 a confused jumble of spider babies on acid

On Saturday and Sunday (19th-20th January) we held a Hack the Space weekend to clear down some of the clutter and change the layout of our community hack space.

It had become, in the words of one ‘a confused jumble of spider babies on acid’*.

So we gathered, at first there was Tom, Bill and I, but it quickly grew into Kay, Rob, Col and Rhiannon (and Ben the habitual vallium hound).

** The end result is that our little Space looks twice as big now. There is more room to do crafting and art, to make, mend, repair and invent. It is cleaner, more logical and better.

A huge shout out has to go to Tom and Kay who had all the ideas and discussions ahead of the day to make sure we had a semblance of a plan and to everyone who took the time to come and help.

As always thanks to all the members who gave suggestions, support or even just the heartfelt thanks. 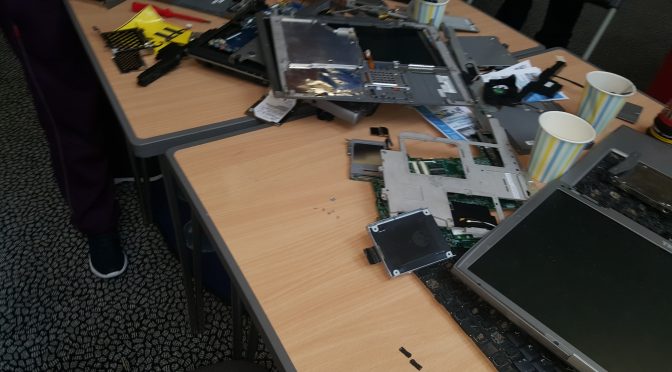 So recently we decided to run a Wine and Cheese night, for all the members to get together and chat, drink wine, and eat cheese! Helpful, as several of us members enjoy Cheese, Wine (or in this case, Port), and each others company.

After the initial sorting out, including Claire cutting some signs for each Cheese out of Acrylic on the Laser Cutter, we started digging in – many thanks to Ian and Claire for sourcing the Cheese, and Mark and Louis for sourcing many of the Chutneys on show.

There was a large selection of cheese, as can be seen above – the most popular was unarguably the Snowdonia Original, although the Irish Original Porter dissapeared soon after. An unusual one was the Sticky Toffee Cheddar, which was… well, sticky and tasted of toffee. Interesting in a non-disgusting way by all accounts.

All in all, a wonderful event, with only one dissapointed member – Ben the dog, who was on crumb watching duty the whole evening.